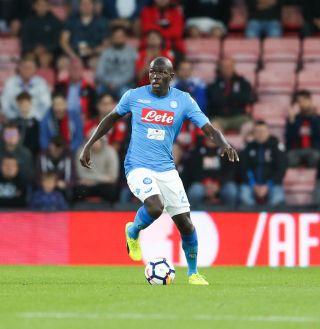 Kalidou Koulibaly claims the Napoli players are “angry” with the performance in losing to Arsenal last week but insists they can progress from their Europa League quarter-final.

The Gunners head to Italy with a 2-0 lead after outplaying their Serie A opponents in the first leg at the Emirates Stadium a week ago.

Unai Emery’s side have so far lost both of their away knockout games in this season’s Europa League, slipping to defeat at BATE Borisov and Rennes before turning both ties around at home.

Koulibaly, the subject of racial abuse on a Snapchat video shot during the game in north London, believes Napoli can improve on their previous display and secure a semi-final date against either Valencia or Villarreal.

“We’re angry about the performance in London,” he told Napoli’s official website.

“We know we messed up and we’re aware we didn’t show our true quality. We want to do so in the return leg.

“There’s still a chance we’ll go through if we play as we can do, at the height of our ability. It’s still open. We need to be aggressive and put pressure on Arsenal. We’ll be ready on Thursday.”

Midfielder Jose Callejon revealed the Napoli players held a meeting after the first leg and, like Koulibaly, still feels the club can make it to the last four.

“We will give everything we have inside us to get through,” he said.

“After the first leg we got together and spoke between ourselves. We spoke openly about everything. We’ve got a solid and united dressing room, which is something we’ve shown over the years.

“We’ve very optimistic. We got our approach wrong in the first leg. There was a feeling of disappointment after the game in London.

“But now we’ve got a chance to turn it around and put in a great performance to get to the semi-final.”