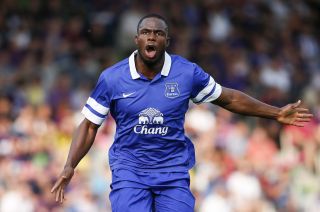 Anichebe adds to another attacking deadline-day signing at the Hawthorns, with Stephane Sessegnon also joining for a "club-record" fee from Sunderland.

West Brom have offset the expected departure of Peter Odemwingie, who was reportedly set to join Cardiff City as the deadline slammed shut on Monday.

The Nigeria international made his Everton debut in February 2006 and went on to make 168 appearances for the club, scoring 33 times.

He has made 11 appearances for his country and scored once, on his debut in an Olympic Games qualifying match against South Africa.

West Brom were also thought to have launched a late bid to bring Romelu Lukaku in on loan after the Belgian starred last season, scoring 17 goals in 38 games for the Midlands club.

However, the Chelsea youngster has instead opted to sign a season's loan at Everton - where he will fill in for Anichebe.

He will now link up with Steve Clarke at The Hawthorns, who reportedly cancelled a last-gasp move for Shane Long to Hull City once Everton's capture of Lukaku was confirmed.

Long had travelled to East Yorkshire for a medical and to agree terms, but Clarke pulled the plug, leaving Hull boss Steve Bruce with just one late arrival - the return of Egypt striker Gedo on a season-long loan deal.