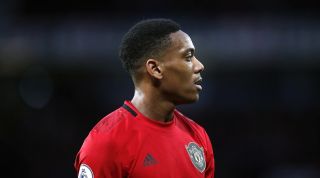 Martial has scored only one goal in his last five Premier League outings and was quiet throughout Saturday's 0-0 draw with Wolves.

The France international has failed to step up in Marcus Rashford's absence, even though a lack of midfield creativity has made Martial's task more difficult.

And Solskjaer insists he is happy with how the former Monaco man is playing, despite his lack of goals in recent weeks.

“He's giving us everything. I think he's started the last eight games in this month, and he's running probably 20% more than what he did when I came here," the United boss said.

“That shift goes with all the other players as well, by the way. So it's not just mental robustness and tactical, it's that physical side we've had to work with, because they are making strides. But the difference in that, compared to when I came in, the squad weren't right.

“Well we'll give him [Martial] more support, give him rest when he deserves it.  If he does have that rest, if he plays a little bit less - because he's been asked to play too much as well, especially now when Marcus is injured - as a striker, if you don't just get there that split second, that's a big, massive difference.

“I've praised him, I've sat down with him and I'm delighted with him. I know that he's tired, but he's never ever dodged a training session. He's training, he's available for every game, so I’m delighted with the boy.”

United are not in action again until February 17, when Solskjaer's side face Chelsea in a crunch clash at Stamford Bridge.

Victory over the Blues would move United to within three points of the top four, but defeat would severely damage their chances of a Champions League qualification spot.