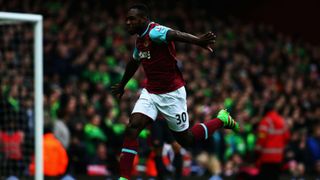 Michail Antonio has signed a new contract with West Ham, tying him to the London club until 2020.

And, after an impressive debut season in which he scored nine goals as West Ham finished seventh in the Premier League, he has extended his stay with the club by a further year.

"I am delighted to have signed a new contract. I am happy that the manager and the chairman have showed their belief in me to give me a new deal," Antonio told West Ham's website.

"I have always believed in my own ability and when I am given the opportunity I will take it and hopefully I have showed that.

"I had to be patient when I first arrived, but once I got the chance I never looked back and hopefully I can now push on and do even better than what I did last season."