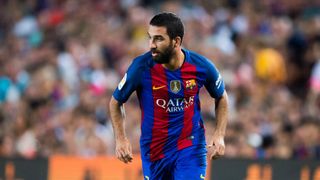 Arda Turan and Burak Yilmaz are among the big names to have been dropped from the Turkey squad for games against Russia and Croatia.

Turkey were eliminated from Euro 2016 in the group stage and coach Fatih Terim has wielded the axe in response, with Selcuk Inan, Gokhan Gonul, Hakan Balta and Caner Erkin also left out.

Arda was whistled at Euro 2016 by Turkey fans who felt the Barcelona winger's performances were substandard, while Beijing Guoan striker Yilmaz's international career could be over at the age of 31.

Turkey face Russia in a friendly on Wednesday before taking on Croatia in their first qualifying game for the 2018 World Cup.

Among the fresh faces in a squad that does not feature any players over the age of 30 is teenage Manchester City forward Enes Unal, who is on loan at Twente and hit a hat-trick in the Eredivisie last weekend.