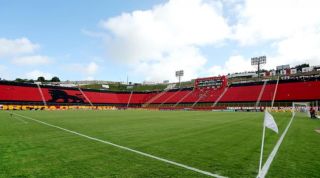 Tigre led 3-1 with 27 minutes remaining in the rescheduled Argentina Primera Division round eight fixture on Wednesday.

But hosts Godoy Cruz - aided by Erik Godoy's red card in the 72nd minute - hit back with two unanswered goals to level proceedings at the Estadio Malvinas Argentinas.

And Uruguayan midfielder Rodriguez completed the comeback in the 91st minute, firing a thunderous long-range shot into the roof of the net, as Godoy snapped a six-game losing streak.

Tigre took a 17th-minute lead through striker Carlos Luna, who was played in by team-mate Sebastian Rincon before looping the ball over Godoy Cruz goalkeeper Sebastian Moyano.

Ecuador striker Jaime Ayovi equalized after 30 minutes, heading home from a corner for the home side.

But Luna netted his second of the match two minutes later as Tigre took a lead into the break.

Leandro Garate come off the bench and doubled Tigre's advantage just past the hour-mark, beating two defenders and placing the ball beyond Moyano.

Ayovi kept Godoy Cruz in the contest with a diving header inside the six-yard box in the 69th minute.

And the hosts took full advantage, Gonzalo Cabrera levelling the scores four minutes later before Rodriguez produced the goods with a sensational effort from outside the box.