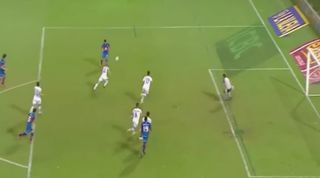 Velez Sarsfield were leading Tigre by a single goal approaching half-time of their clash on Tuesday night, but Alexis Castro levelled things with a glorious effort just a few seconds before the end of the half.

Lucas Menossi slotted his team-mate through on the left-hand side of the box and, with just one touch, Castro casually flicked the ball over goalkeeper Alan Aguerre with the outside of his boot.

Aguerre got a fingertip to the shot, but it wasn't enough to change the ball's flight as it looped into the net.

Velez Sarsfield took all three points in the 91st minute, though, as Hugo Pavone converted his second penalty of the match. The result left Tigre 25th in the 30-team (!) Argentine Primera Division, but their fans won't be forgetting Castro's strike anytime soon. So that's something.