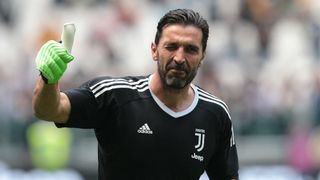 Gianluigi Buffon bade an emotional farewell to Juventus during Saturday's 2-1 win over Verona before hoisting the Serie A title.

The 40-year-old goalkeeping great is poised to play on elsewhere, with Paris Saint-Germain considered the favourites for his signature.

Buffon's departure ends one of the most decorated and enduring careers in Italian football history.

Here we take a look at the numbers racked up by a Juventus icon.

9 – No player has more Serie A titles.

974 – Buffon set the record for the longest streak without conceding a goal in minutes in Italy's top flight.

117 – No Italian player has made more Champions League appearances. Iker Casillas (167) is the only goalkeeper with more. This season, Buffon became one of only four players to pass 10,000 playing minutes in the competition.

38 – Lazio, Milan and Udinese are the opponents Buffon has faced more than any others in Serie A.

20 – He shut out Udinese in more than half of those matches, making them Buffon's most profitable opponents in terms of clean sheets.

247 – No Juventus player has made more appearances alongside Buffon than long-time defensive ally Giorgio Chiellini.