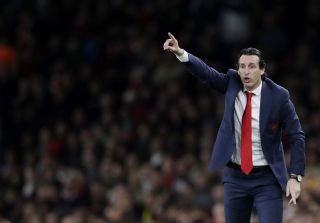 Unai Emery insists Arsenal only have a “50-50” chance of reaching the Europa League showpiece, despite building a 3-1 semi-final lead against Valencia.

Alexandre Lacazette’s first-half double and a late strike from Pierre-Emerick Aubameyang put the Gunners in control of the tie going into next week’s second leg.

Emery’s side recovered from an extremely shaky start which saw Mouctar Diakhaby head an 11th-minute away goal for the Spanish side, after Valencia defender Ezequiel Garay earlier missed an open net.

“It’s a good result at home in the first leg but the second leg is going to be very difficult and maybe different,” said Arsenal boss Emery, who managed Valencia from 2008 to 2012.

“We can be happy today and proud of the players because after 1-0 it’s not easy to be calm and come back with this team.

“And it is the reason I am very proud of our work today but it’s going to be very difficult.

“I still believe that the tie is in the balance, we know how tough it will be to beat Valencia again. And they will be looking to respond.”

Lacazette slotted into an empty net to level the contest after being teed up in the 18th minute by fellow forward Aubameyang, before heading home a Granit Xhaka cross just seven minutes later.

The Gunners appeared on course to take a slender advantage to the Mestalla, but Aubameyang volleyed in a 90th-minute third which gave them some breathing space.

Emery, who was impressed with the contribution of his strike force, says his team must go to Spain looking to win, rather than be content with protecting their aggregate lead.

“Aubameyang and Lacazette played very well this evening,” he said.

“We managed to get in dangerous situations near their goal, and in the first half towards the end we got in four to five times out wide.

“The game was played in strange circumstances given how it started… there were moments where we got things right and times when we didn’t, and they could have scored in the second half.

“We need to play there thinking to win, thinking to score, thinking to take our moment in attack. They are going to feel strong with their supporters there.”

Valencia coach Marcelino thought his side matched the hosts for much of the game and remained optimistic of reaching the final in Baku on May 29.

“We are very sorry that we didn’t manage to get a better result this evening. Arsenal made the most of their opportunities, their first two attacks resulted in goals,” said Marcelino.

“We played well and the goal towards the end was a surprise, nobody was expecting it. And it makes it a more difficult situation for us. (But) it doesn’t take anything away from our thoughts that we can still reach the final.

“They have two very good strikers, I don’t know how many millions of euros they cost and if you make even the slightest mistake at this level players like them can take advantage of that.

“I don’t think any Valencia fan will feel that they are particularly stronger than us, or the superior side. As professionals, that’s not how we felt.

“We know how tough it will be to win 2-0 against a very good side but, if we have our fans behind us and get things right next week, we know that we can do it.”