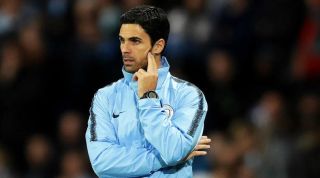 Arsenal sit just four points above the relegation zone after a poor run of form that has seen them freefall down the Premier League table.

But the Swede, who was part of Arsenal's famous 'Invincibles' side, has so far failed to inspire a return to winning ways.

The search for a permanent solution feels ever-more urgent if Arsenal are to have any chance of European qualification next season.

According to the Express, the Gunners board have made Mikel Arteta their number one choice for the role.

The Manchester City assistant is also in the sights of his other former club Everton, but it's understood Arsenal are favourites to recruit him.

Arteta was Arsenal's initial preference to replace Arsene Wenger in 2018, but a late change of heart saw Emery take the role instead.

Now, 18 months later and Arteta's reputation has been helped by Pep Guardiola stating that he would be an excellent heir to the City throne.

However, Guardiola has a year and a half left on his contract and Arteta is believed to be ready to step out of his shadow.

City are reportedly keen to hold onto Arteta, at least until the summer, but Arsenal could tempt him to make the move back down to London sooner.

Guardiola's praise for his number two will give confidence to the Arsenal hierarchy and fans alike.

“He’s helped me a lot. From day one, so not just the last two seasons, from day one," Guardiola said.

“He has an incredible work ethic, and he has a special talent to analyse what happens, and to find the solutions.

Pep also stated that he wouldn't stand in Arteta's way if he were to want to leave.

“I’m not a guy that puts a gun to the heads of my staff or players and says what they have to do,” he said.

“We are human beings and everyone has dreams and desires. Hopefully, he can stay this season and the next one – as long as possible in this club."

What exactly does a club’s 'DNA' mean – and do managers really need it?