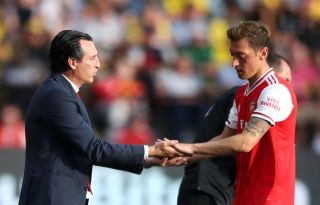 All signs appear to point toward to Ozil leaving Arsenal in January, after making just two appearances this season.

The German midfielder has not been in the Gunners' last three matchday squads.

There were suggestions of a summer move to Turkey, where Ozil got married last summer, but the player's wages are a major stumbling block for interested suitors.

But now Italian pair Inter Milan and Milan are considering moves for Ozil, according to Calciomercato (via The Mirror)

However, the 30-year-old's wages could still prove an issue for the Serie A sides as well.

It could be the case that Arsenal end up subsidising a percentage of Ozil's earnings until the summer.

Arsenal's head of football Raul Sanllehi has denied that Emery and Ozil have a bad relationship, despite rumours that they don't get along.

"Unai has had many good players in other teams also, and he has always followed the same policy," Sanllehi said.

"That is to try not to make any distinctions, play the ones who work hard in training and reward the effort with playing time.

"There is nothing against Mesut on the contrary and I hope we get to see him much more in the next games, because his qualities are without question."

Sanllehi does admit, however, that Ozil must work harder to earn his place in the squad.

"He needs to contribute 24/7 and that’s what Unai expects from him.

"It’s not that he’s not working so well, but there are others who are deserving more playing time. Unai can’t treat him differently than any other player."

Wake up, UEFA – it's time to finally start hitting the racists where it hurts