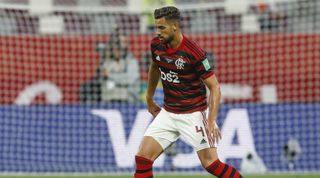 It's believed that he was due to undergo a medical over the weekend ahead of completing a move to the Gunners.

However, according to the Daily Mail, the deal is not quite agreed, and Mari is heading back to Rio De Janeiro for the time being.

The former Manchester City player was a surprise name to be linked with Arsenal but things seemed to move very quickly.

He helped the Brazilian side to the Brasileiro title, as well as lifting the Copa Libertadores in a famous last gasp win against previous champions River Plate.

It's reported that Mari may have even completed the medical that he was booked in for, before boarding a plane back to Rio.

The negotiations are thought to be ongoing, although they appear to have hit a late snag.

Flamengo are believed to be holding out for an outright sale of the Spanish centre-back, whilst Arsenal prefer a loan with an option to buy.

The 26-year-old will be hoping the deal is concluded soon as he even had friends congratulating him and wishing him well for his move on social media.

Arsenal head coach Mikel Arteta will also be concerned for the deal getting over the line as he has repeatedly stated his squad may be short defensively.

Arteta leads Arsenal into their FA Cup fourth-round tie against Bournemouth this evening.