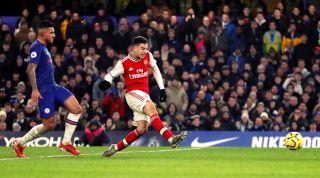 In an era when we have so much information, so many ways and means to analyse a football club and its performance, it's often forgotten or overlooked that how you feel as a fan plays a big part in your supporting experience. Ask any Arsenal fan now how they're feeling and the majority will tell you that in comparison to last dark days of the Unai Emery era, it's better.

When you look at results, perhaps it's hard to see that. Mikel Arteta has taken charge of seven games since his appointment as Arsenal manager. In that time he has won two, drawn four, and lost one; on the face of it, not a drastic improvement on what came before. Yet your eyes tell you, and the metrics back it up, that the Gunners have improved.

First and foremost, there's defensive security that's markedly different from the Emery era. Regardless of the opposition, there were myriad ways in which they could be exposed. A simple long ball over the top of the defence; a routine pass which bypassed the midfield; space in behind the full-backs; countless individual errors; choose your poison.

Emery's Arsenal were brittle, a point illustrated in brutal fashion by that game against Watford in which they let slip a 2-0 lead, and allowed the home side a record number of attempts on goal. That doesn't happen under Arteta. Is the defence perfect? Of course not, but it has improved.

What's interesting is that the personnel are the same. The central defenders who looked like they should be put out to pasture are now performing at a much higher level. Arsenal have been able to cope with an 18-year-old winger in Bukayo Saka at left-back, and even in the 2-2 draw with Chelsea, when Luiz was sent off, Granit Xhaka stepped back from central midfield and performed outstandingly at the centre of the defence.

The key to that has been the structure and organisation that Arteta has put in place. They now look like an actual team, rather than a group of individuals who weren't quite sure what to do or how to do it. The spacing is better, they are more compact and crucially they manage those distances in and out of possession, making it much more difficult for the opposition.

The former captain inherited a squad which was low on confidence and belief. It's always difficult to measure intangibles, but something had been very clear in recent times: when things went wrong on the pitch, Arsenal found it very difficult to cope. There wasn't a great deal of resilience, there was an almost fatalistic acceptance that the outcome would be poor – which it very often was.

Arteta spoke in his first interview about changing the mindset, and over the last few weeks, there has been growing evidence of a more robust Arsenal emerging. The fact that they twice came from behind against Chelsea, playing for more than an hour with ten men, shows that he has tapped into reserves of character and spirit that many felt had been exhausted by the relentless drudgery of Emery's time at the club. An ability to deal with adversity against a big rival and to demonstrate the willpower and determination to not give up feels like a big step forward.

As well as the collective looking far more assured, individuals have flourished too. Lucas Torreira, now back in his best position has become an integral part of Arteta's structure. Xhaka's rehabilitation after his recent trials and tribulations is both unexpected but welcome given how well he's playing. Luiz looks like a different player, one who is relishing the responsibility and leadership Arteta is demanding of him, while youngsters like Saka, Ainsley Maitland-Niles (also filling in as a full-back to good effect), and the exhilarating Gabriel Martinelli are proving worthy of their places in the squad.

It should be acknowledged that there is still plenty of work for Arteta to do. The team hasn't yet properly clicked as an attacking force, and finding the balance between defensive security and attacking threat will be a challenge. They also have to find a way to avoid the concession of late goals, thus dropping points, and the squad is still in need of some reinforcement.

However, in just a short space of time, and as a rookie manager coming into a big club in its worst run of form in decades, what Arteta has done has been hugely positive. He's earned the trust of fans who had every right to be sceptical of his appointment with a clarity of vision and communication which is welcome, and which has been transmitted to the team and is visible in the way they play.

It might only be a small step forward at this point, but it's definitely one in the right direction.