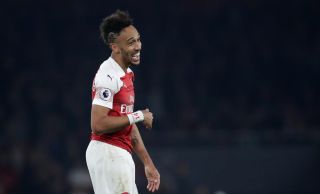 Jesse Lingard’s goal celebration in Arsenal’s recent FA Cup defeat to Manchester United acted as motivation for the Gunners as they secured victory in Sunday’s Premier League clash between the top-four rivals.

Goalkeeper Bernd Leno and striker Pierre-Emerick Aubameyang claimed after the 2-0 win that the memory of Lingard moonwalking at the Emirates Stadium in January gave added incentive to secure three points on Sunday.

The win allowed Arsenal to leapfrog United into fourth place, providing a further twist to Champions League qualification during a weekend when Tottenham and Chelsea dropped points.

Lingard celebrated a goal in United’s 3-1 FA Cup fourth-round win at Arsenal earlier in the year by dancing in front of the Gunners supporters.

The England international, who also scored twice in a league clash in north London last season, further irked Arsenal fans by posting his recent celebration on Instagram with the location set as ‘Dancefloor’.

Lingard missed Sunday’s game as he nurses a hamstring injury but Leno, who enjoyed another fine afternoon in goal for Arsenal, admitted the forward’s previous antics had spurred on the hosts.

“In your mind, you will never forget something like that, when somebody is celebrating,” he said when asked if the win was revenge for the FA Cup loss and Lingard’s dance.

“You don’t want to see it again, so we were motivated. We knew before the game about our chance because Man United had one more point than us.

“Now we have two points (more than United) and that was enough motivation for us. We are in the top four, and the other teams now wait for our mistakes.

“There are still eight games, and we want to win every game but we have to focus on each one because the other teams will wait for small mistakes.”

Aubameyang, who stroked home a penalty after strike partner Alexandre Lacazette had gone down under pressure from Fred, concurred with Leno – but also revealed he had originally planned his own celebration.

When asked whether there was added motivation to beat United because of what happened in the FA Cup tie, he replied: “Yes, of course.

“I actually had a special celebration planned for the game but I could not find my mask! No worries.

Reflecting on the win overall, he added: “We are happy because the most important thing is the three points, and it is a really, really good feeling.”

The 29-year-old Gabon international stepped up to take the pivotal spot-kick after missing a late penalty in the draw with north London rivals Tottenham a week earlier.

Despite passing up a fine chance to secure victory over their neighbours, Aubameyang was in no doubt he wanted to retain the responsibility.

“I watched it a lot, the penalty I missed,” he said.

“I knew that I made a mistake when I shot last week. But in life, you have to always look forward. I had to be focused, and that’s what I was.

“It’s about feeling. We don’t care about who is shooting the penalty, the most important thing is to score.

“After Lacazette got the penalty he said to me, ‘You have to shoot’. I felt well and I was ready to score.”