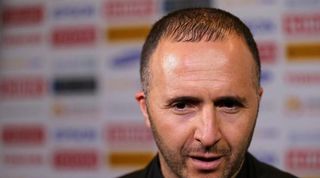 Qatar arrive in Australia in red-hot form after overcoming Saudi Arabia 2-1 to clinch the Gulf Cup title in November and head into the game at Canberra Stadium as favourites.

Prior to that run in the Gulf Cup, Djamel Belmadi's Qatar - ranked 95th in the world- had won four successive games, including a shock 1-0 victory over Asian Cup hosts Australia in October.

Speaking ahead of the clash with UAE, Belmadi said his side is confident but at the same time wary ahead of the tournament.

"Of course we have confidence after this previous success but we know the AFC Asian Cup is another competition and the level will be higher," the Algerian said at a media conference on Saturday.

"For most of my players this is their first AFC Asian Cup so it's also another opportunity to improve individually and as a team."

Qatar have not tasted defeat in their last 11 outings but Belmadi insists his players have the utmost respect for UAE, a side they have not beaten since 2006.

"They have a good team, they won the Gulf Cup the year before us in Bahrain, so it'll be a big game with two important teams," Belmadi said.

"It'll be a different environment and different atmosphere (to what we are both used to ) so it'll be a massive game."

UAE head into the tournament off the back of a third-place finish at the Gulf Cup but have played just one friendly since then, a 1-0 triumph over Jordan, with a scheduled hit-out against Kuwait last weekend cancelled due to a dispute over the filming of the game.

Attacker Omar Abdulrahman will be a key player come Sunday, with the 23-year-old one of the most highly regarded talents in Asia.

Abdulrahman was named as the best player at the 2013 Gulf Cup and may well have moved to Manchester City had work permit issues not scuppered a proposed transfer to the English champions in 2012.

Qatar have plenty of quality of their own and in midfielder Khalfan Ibrahim they have a true goalscoring playmaker.

The 26-year-old is referred to as the 'Maradona of Qatar' in his home country and banged home 14 goals in 26 appearances for club side Al Sadd last term.