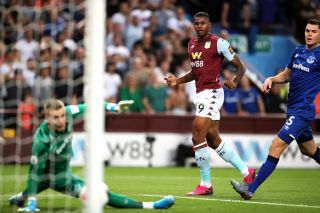 Boss Dean Smith had questioned criticism of Wesley, the club’s record signing from Club Brugge, after just two games and he became the first player this season to breach Everton’s defence.

Alex Iwobi was denied a debut Everton goal when he hit the post late on and Theo Walcott blazed a golden chance over with a minute left.

El Ghazi then added a second in injury time as the Toffees missed the chance to move top of the early Premier League table.

Villa – who had endured a three-year exile from the Premier League prior to this season – had gone toe-to-toe with Everton during previous campaigns but struggled to get near the Toffees in a gritty opening.

The visitors dominated the ball, being allowed through Villa’s midfield too easily, without driving home their advantage.

It therefore left them shell-shocked after 21 minutes when Villa opened the scoring with their first chance.

Grealish’s quick free-kick allowed Jota to skip away and his superb throughball found Wesley to fire across Jordan Pickford.

With something to cling to Villa grew in confidence and Yerry Mina’s last-ditch challenge was needed to thwart Wesley three minutes after his opener.

Everton’s grip on the game, however weak, had been lost but they should have levelled after 32 minutes.

"There have been lots of signings but it feels like we have all been here for longer. Everyone has been made to feel really welcome. To get our first #PL win is very special"— Premier League (@premierleague) August 23, 2019

A neat Morgan Schneiderlin pass set Seamus Coleman free and his cross fell to Dominic Calvert-Lewin but his casual finish was blocked on the line by debutant Bjorn Engels.

It was the only serious first-half threat the Toffees created though and Villa began to feel more settled in their Premier League skin.

As Villa stood firm Everton waned, Mina headed over Lucas Digne’s corner early in the second half but Everton were floundering, lacking direction and purpose.

Moise Kean and Iwobi were summoned from the bench as Marco Silva threw caution to the wind.

Everton had spent most of the second half probing for a leveller and they came agonisingly close to equalising with eight minutes left when Iwobi latched onto Michael Keane’s knockdown and his 16-yard effort hit the base of the post.

El Ghazi tested Pickford from distance soon after yet Walcott should have levelled in the 89th minute but volleyed over from eight yards after being picked out by Kean.

El Ghazi then rolled in to seal the points for Villa in stoppage time after being teed up by John McGinn.