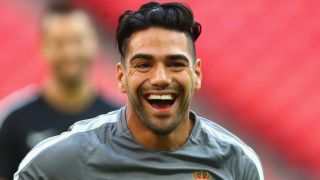 Radamel Falcao says Monaco need only look to Atalanta for inspiration ahead of their Champions League semi-final date with Juventus.

The Ligue 1 leaders host Massimiliano Allegri's side in the first leg on Wednesday before travelling to Turin on May 9.

Juve are on course for a treble this season and have built their impressive form on a redoubtable defence that has yet to concede a goal from open play in the Champions League in 2016-17.

Indeed, the Serie A leaders had managed five clean sheets in a row in all competitions until their 2-2 league draw with Atalanta on Friday.

But Falcao, whose Monaco side have scored three goals in each of their four knockout games this term, believes Gian Piero Gasperini's men have shown that Juve's backline is not invincible.

"Scoring against Juve is not easy because they are a really well-balanced team," he told La Stampa.

"They have great players of a really high level, but above all they are good at defending as a team.

"But although it's true that Barcelona couldn't get a goal against them, Atalanta got two. In football, anything is possible..."

Falcao, who has five goals in six games in Europe this term, is looking forward to the prospect of facing Juve veteran Gianluigi Buffon for the first time.

"Buffon is a great goalkeeper," said the Colombia striker. "We all admire him. And I've never faced him: scoring a goal would be a big boost."

Bianconeri legend Gianluigi Buffon has made 99 appearances for Juventus in the .  May 2, 2017