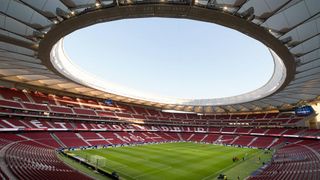 Atletico Madrid have been ordered to partially close their stadium for their first home game of the 2018-19 Champions League group stage by UEFA.

The Spanish giants were charged by European football's governing body after fans displayed what it deemed as a "racist" banner during their Europa League final victory against Marseille in May.

Omnisport understands the charge relates to a flag inside Groupama Stadium that appeared to be styled like a Nazi war ensign.

As punishment, Atletico must close a section of the Wanda Metropolitano that includes at least 3,000 seats for their next home game in UEFA competition.

The club have also been issued a €2,000 fine for setting off fireworks in Lyon.