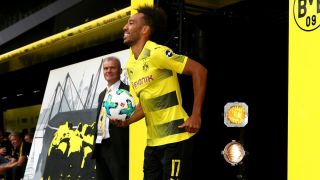 Borussia Dortmund forward Pierre-Emerick Aubameyang is delighted that his "hero" Paolo Maldini has acknowledged his progress since leaving AC Milan.

Gabon international Aubameyang was on Milan's books between 2007 and 2011, but he failed to make a first-team appearance before moving to Saint-Etienne.

An impressive stint in France was rewarded with a move to Dortmund, where Aubameyang has established himself as one of Europe's top forwards and scored 31 Bundesliga goals last season.

Maldini - who was a player at Milan until 2009 - recently conceded that the Serie A giants had failed to recognise the forward's potential and could not now afford him - something that Aubameyang is pleased with.

"Happy to read that Maldini had some nice words about me," Aubameyang tweeted, alongside a picture of the pair. "I was watching him like a hero when I was in Milan."

Happy to read that P.Maldini had some nice words about Me i was watching him like a hero when i was in Milano September 10, 2017

Aubameyang has scored two goals in three league games so far this season, with Dortmund beginning their Champions League campaign at Tottenham on Wednesday.