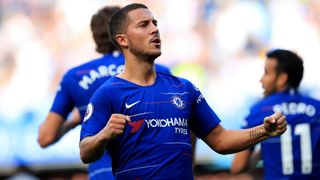 Cesar Azpilicueta is adamant his Chelsea team-mate Eden Hazard has the capability to the best player in the world if he learns to be more aggressive in the penalty area.

Ever since joining from Lille in 2012, Hazard has consistently been regarded as one of the Premier League's elite players.

The Belgium star has reached double figures for Premier League goals in four of the last five seasons, while he has also impressed as a creative force.

Hazard's start to the new season has attracted plenty of praise, with the 27-year-old netting five times in as many games, despite making just three starts.

Azpilicueta is confident Hazard can maintain such form ahead of Sunday's away clash with West Ham, and feels the tricky attacker has not hit his ceiling yet.

"I know Eden, we came here together and I played against him in France so I have seen him for a long time but, yes, I'm sure he can be the best," Azpilicueta told MailOnline.

"He has that quality of eliminating defenders. It's amazing. But this season he is adding goals and assists.

"Sometimes he was playing very good, but maybe not selfish; he always gives passes to team-mates.

"[Lionel] Messi, Cristiano [Ronaldo], they score 50 goals a year and that is very difficult in England.

"But from his point of view, if he's more aggressive in the box by scoring goals and making assists, he will be the top of his game. In normal play he can create chances. It looks very easy. He goes quick, he scores with both feet.

"Eden has all the qualities to be the best, and his personality as well, the way he behaves. He's the best player in the team, but the way he respects everyone, he's a normal person.

"That's amazing to have the best player and his behaviour and everyone loves him in the club. That's as important as his work on the pitch."