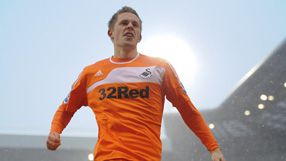 The Icelandic international was allowed to leave for Premier League outfit Swansea City in January after being deemed surplus to requirements by former boss Holger Stanislawski.

Since his arrival in the Premier League, the 22-year-old has been in superb form, netting six goals in 10 games while picking up the March Player of the Month award.

Reports suggest Swans manager Brendan Rodgers is keen to hold on to Sigurdsson beyond the summer.

However, his impressive performances in the Premiership haven’t gone unnoticed in Germany and Babbel is thought to be keen on giving the former Reading trainee a second chance to prove his worth in the Bundesliga.

"Gylfi (Sigurdsson) is under contract at this club for next season. He will come back and train with us," Babbel told Rhein-Neckar-Zeitung.

"It is difficult for me to jump on a plane and visit him in Swansea due to time restrictions.

"He is playing in a different team and a different competition and you cannot compare the Premier League with the Bundesliga.

"He has already shown during his time here that he is a good passer of the ball and that he can score goals. I am keen to get to know him, and that is why I want him back.

"The fact is that he is under contract here and he will start the new season at this club."

Rodgers has voiced his disappointment at Babbel’s comments, but was quick to praise the youngster’s impact during his short time with the Swans.

And the former Chelsea youth and reserve team coach believes the midfielder is destined for the very top, saying: "He has been a wonderful acquisition, I knew what I was getting and he has delivered brilliantly and hopefully he can continue that until the end of the season.

"He is in the Frank Lampard mould, he gets into the six-yard box, is willing to get his shot off with his left or right foot and can score with his head like he did at Fulham.

"He is a goalscoring midfield player and you don't get too many of those. But he has that instinct, he was born with it and he works very hard on his shooting and finishing.

"He is still very young but he is a player who can do well at this level, as he has shown. He has the same hunger as Frank, who wanted to be better every single day."