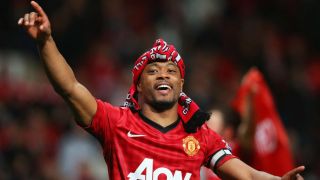 It looks like Patrice Evra is ever so slightly looking forward to returning to Old Trafford next week.

The Marseille full-back is due to take part in Michael Carrick's testimonial match next Sunday, in which a team comprising members of the Champions League-winning side of 2008 will face an All-Star XI.

Evra, a winner of 10 major trophies in a glittering United career, will get the chance to line up alongside old team-mates including Rio Ferdinand, Nemanja Vidic, Paul Scholes and Ryan Giggs, with Alex Ferguson to lead the team as manager.

The 36-year-old is rarely shy about sharing his emotions via his official Instagram page but his latest post is among the more excitable short videos you are likely to see...