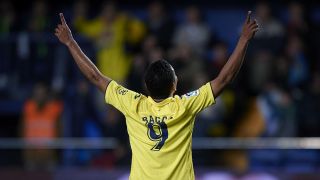 Carlos Bacca hopes to stay in LaLiga for the 2018-19 campaign despite having two years left on his contract with AC Milan.

The Colombia international spent last season on loan at Villarreal after falling out of favour at San Siro, Bacca scoring 15 goals as the Yellow Submarine finished fifth.

It was a third prolific season in Spain for the 31-year-old, who spent two years with Sevilla before joining Milan in 2015.

And Bacca is keen to return rather than joining back up with his parent club in Italy.

"I feel good and I'd like to stay in Spain," Bacca told Fox Sports Radio Colombia.

"We're waiting, I have a contract with Milan and I respect it. I need to wait until I can go back and talk to them about the situation and what they want from me. Then I'll say what I want and we'll make the decision.

"I will return with hope as always, with the desire and optimism to do things right. We do not know what will happen, we leave everything in the hands of God.

"I have to present myself at Milan, but I doubt I'll stay in Serie A with [Cristiano] Ronaldo."