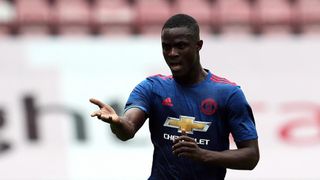 Manchester United defender Eric Bailly has revealed Manchester City also showed an interest in signing him from Villarreal, but he only wanted a transfer to Old Trafford because of the presence of Jose Mourinho.

Pep Guardiola's assistant approached the centre-back to sound him out over a potential transfer to City, but they never stood a chance once Mourinho made his move, with fellow Ivorian Didier Drogba advising him to team up with the Portuguese manager.

"I signed for United because I like Mourinho, as simple as that," Bailly told The Sun. "I wanted to play for someone who works very hard.

"I didn't speak to Pep Guardiola, but the 'second' manager called me.

"Mourinho called me as well and he told me to come and play for him. I prefer Mourinho, in part because of Didier Drogba, who worked with him. Didier is a friend and he told me Jose did a lot for him.

"Yaya [Toure] also called me and wanted me to come to City, but once Jose spoke to me and Didier gave me advice, I knew straight away I wanted to play for him."