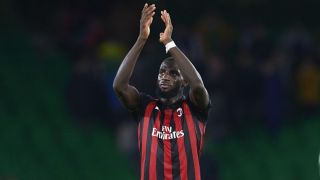 Tiemoue Bakayoko is hopeful he can help AC Milan qualify for the Champions League this season to help secure a permanent move from Chelsea.

The France international joined Milan on loan at the start of the campaign, with the Italian club also having an option to buy the player for a reported €35million fee.

Bakayoko has enjoyed his time in Serie A so far after struggling to make an impact at Stamford Bridge. The former Monaco midfielder admits he wants to remain at San Siro beyond this season.

"It's my dream [to stay], the thought fixed in my mind," he told Corriere dello Sport. "But I have a contract with Chelsea.

"[Milan chief] Leonardo says the deal is tied to the Champions League. I'm not in a position to talk about it. I just want to finish the season in fourth place, then we'll think about it."

And Bakayoko appreciates Gennaro Gattuso's coaching style after the Milan boss helped him settle in at the club.

"Gattuso was not my ideal player, although I say that with great respect because he won the Champions League, which is my dream," he said. "Please do not tell him...

"For me, he is the boss and a nice person who has helped me a lot. In the first two or three months, when everything was not going well, we talked every day.

"Now we understand each other with a glance and our relationship is perfect. He has a talent to show love to his players."