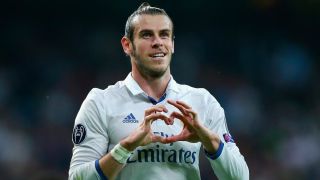 Gareth Bale has resumed Real Madrid training ahead of next week's Champions League final against Juventus.

The Wales international suffered a calf problem in the 3-2 LaLiga defeat against Barcelona on April 23, making his comeback in the Clasico after previously suffering a similar injury against Bayern Munich.

Bale has been out of action ever since, missing the final stages of the domestic season as Madrid clinched their first title since 2011-12, but he could make his return in the showpiece in Cardiff on June 3.

The 27-year-old took part in Friday's training session without any noteworthy problems and seems ready for the upcoming clash with Juventus.

Back in training with the boys, all focus towards Cardiff  May 26, 2017

He also found the net in Madrid's 2013-14 Champions League final win over Atletico, netting the second goal to lead his side to the Decima.

The former Tottenham man has been plagued by injury this season and has made a mere 26 appearances in all competitions, scoring nine times.