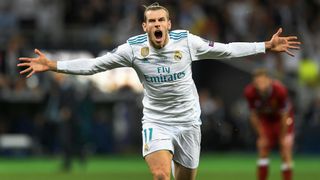 Gareth Bale making a shock return to Tottenham is "not realistic", according to manager Mauricio Pochettino.

Bale made no secret of his frustration with a lack of starts for Real Madrid at the end of last season, suggesting he could leave the club after scoring twice in the Champions League final defeat of Liverpool in May.

The 29-year-old has long been linked with a return to Spurs, although the club would appear unlikely to be willing or able to meet the Wales star's wage demands.

And Pochettino laughed off suggestions the forward could be brought back to Spurs before the start of the 2018-19 Premier League season, although he is hoping new signings will be made before the August 9 deadline.

"I think it's not realistic," Pochettino told reporters after Spurs were beaten on penalties by Barcelona in the International Champions Cup.

"I think we're going to [complete deals], sure, [we'll] see what happens in the next few days. If you say we need to sign, maybe, but with or without injuries that was our target after we finished last season – to add some players with qualities that can help us achieve all that we want.

"I'm not going to talk about targets or names. We'll see in the next few weeks."

Tottenham are yet to sign a player in the transfer window and injuries to Moussa Sissoko, Erik Lamela and Victor Wanyama could hasten their need to add to the squad.

"We need to assess him in the next few days to see what happens," Pochettino said of Sissoko. "We hope it's a minor injury, but he feels something in his hamstring.

"Erik was after the game against Roma, he felt but in a different muscle a minor injury. That's why he's here with us. We hope he can play against AC Milan [on Tuesday]."

Wanyama has returned to London for an assessment on a knee problem, along with youngster Tashan Oakley-Boothe.

"Victor Wanyama has gone back with Tashan [Oakley-Boothe] to London because they need to see the doctor there. We're going to assess him in the next few days and see what happens."