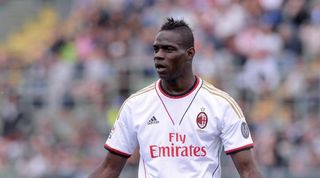 Milan chief executive Adriano Galliani insisted on Wednesday that no bid had been lodged for Balotelli's services, but rumours gathered pace on Thursday that Liverpool are keen to bring the controversial former Manchester City striker back to the Premier League.

Italy star Balotelli trained with his Milan team-mates on Thursday, but reports in his homeland indicated that he told the club's official TV channel that he is on his way out of San Siro following the session.

"It's my last day at Milanello [Milan's training ground]," the 24-year-old is quoted as saying by Sky Sport Italia.

Ex-Inter man Balotelli returned to Serie A in January 2013, and has scored 26 goals in 43 league appearances for Milan.

However, speculation has grown that Milan were open to selling him mounted when they failed to qualify for the UEFA Champions League by finishing a disappointing eighth last season.

Liverpool, meanwhile, are on the look out for a new striker following the sale of Luis Suarez to Barcelona last month.

Should Balotelli complete a switch to Anfield this week, his Liverpool debut could come in their trip to his former club City on Monday.