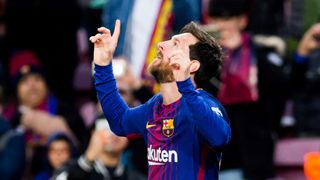 Lionel Messi, Luis Suarez and Paulinho were on target as Barcelona cruised to a 3-0 home win against Levante on Sunday which saw LaLiga's leaders stretch their advantage over Atletico Madrid back to nine points.

Barcelona ended 2017 with a crushing Clasico win at Real Madrid - who are now 17 points off the pace, albeit with two games in hand - and they continued the club-record start to a season with ease, although there was no sign of Philippe Coutinho.

A deal worth a reported £142million was announced by Barca on Saturday, but Ernesto Valverde's men had more than enough to beat Levante prior to the Brazil international's formal arrival at Camp Nou.

Coutinho's predecessor as Barca's record signing, Ousmane Dembele, made his first start since September after recovering from a torn hamstring in another positive development for Valverde.

Messi drew level with Gerd Muller as the most prolific player for a single club in Europe's top five leagues by scoring his 365th LaLiga goal on his 400th appearance in the Spanish top flight, neatly volleying in an early opener.

And Suarez's strike was also a milestone goal, a powerful volley before half-time his 132nd for the club, moving him above Samuel Eto'o to become Barca's seventh-most prolific goalscorer.

Barca had beaten Levante 4-1, 5-0 and 7-0 on their three previous league Camp Nou trips but the visitors battled hard to keep the score down as captain Andres Iniesta made his 650th appearance for the hosts, although Paulinho added late gross by finishing off Messi's magical assist.

No Levante player has scored in LaLiga since November 19 and although the visitors made a bright start at a wet and half-empty Camp Nou, Barca opened their 2018 LaLiga account through talisman Messi after just 12 minutes.

Jordi Alba headed Messi's chipped pass back into the path of the Argentina international, who cushioned a bouncing volley across Oier Olazabal and in off the post.

Jefferson Lerma miscued a shot wide and Ivi's effort deflected off target as a lively Levante sought an immediate response.

Dembele then stung the palms of Oier with a 20-yard shot after a driving run at the other end, Suarez turning the rebound over when he should have hit the target.

Suarez made amends after 38 minutes, however, collecting a Sergi Roberto pass and lashing in an unstoppable volley to score for the fifth successive LaLiga game.

With that strike moves past to go 7th on the all time scoring list at FC Barcelona with 132 goals  January 7, 2018

Levante started the second half as well as they did the first, Marc-Andre ter Stegen making a fine save high to his left to tip over Ivi's strike.

With Barca surprisingly sloppy in possession and open at the back, Jason set up Shaquell Moore for a fine chance but Ter Stegen saved again to maintain his fourth consecutive LaLiga clean sheet.

Suarez wasted a couple of chances to make Barca's victory more comfortable and forward Jose Arnaiz was handed a league debut in the last five minutes.

But it was Paulinho who wrapped up the scoring in the third minute of stoppage time, Coutinho's compatriot tapping in from six yards after Suarez dummied a cross from Messi, who beat three defenders in typically stunning fashion before delivering a superb low cross.