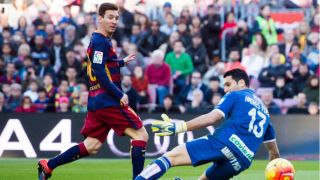 A Lionel Messi hat-trick guided Barcelona to a routine 4-0 win over Granada and back to the top of La Liga.

Messi is favourite to collect a fifth Ballon d'Or of his stellar career in Zurich on Monday but his breath-taking best was not required as he completed three simple finishes at the Camp Nou.

Following the frustration of a goalless draw at local rivals Espanyol last weekend – a result atoned for in an ill-tempered midweek Copa del Rey triumph over the same opponents – Granada proved to be obliging opponents for Luis Enrique's champions.

Neymar added a late fourth, while Arda Turan – making his long-awaited Liga debut for Barca alongside Aleix Vidal – impressed in his new surroundings with an early assist and a key contribution to the hat-trick goal, which arrived before the hour

The defending champions edge a point ahead of Atletico Madrid at the summit before their nearest rivals make a Sunday trip to Celta Vigo.

Granda had beaten Sevilla in their previous league outing, but chances of another upset were quelled as early as the eighth minute. Luis Suarez, the centre of skirmishes following Wednesday's 4-1 derby victory, delightfully dummied a cross-field ball into Arda's path and the Turkey international's cross set up Messi for a deft finish.

Barca's much-vaunted forward trident were all involved in the second goal six minutes later – Neymar's ball in from the left touched back across goal by Suarez to Messi, who converted into an unguarded net after Granada goalkeeper Andres Fernandez errantly pursued the initial cross.

The home domination continued and Suarez exchanged passes with Neymar and rounded Fernandez, only to slice wastefully wide with the goal at his mercy.

Barcelona's complete control of the match meant Suarez felt free to see the funny side of an embarrassing miss, although Luis Enrique was not similarly amused on this occasion nor when Messi fired Vidal's low 31st-minute cross at Fernandez from close range.

Granada defender Doria, who earlier produced a last-ditch tackle as Arda surged clear, made a vital block with Messi poised to complete his treble and Neymar thrashed Ivan Rakitic's searching pass into the side netting three minutes before the interval.

Claudio Bravo did well to hold David Lomban's deflected free-kick as Jose Ramon Sandoval's side made a more composed start to the second half.

It proved to be fleeting encouragement as Messi secured the matchball to put the result beyond doubt after 58 minutes.

An ingenious dummy was involved once more, Turan letting the ball run through to Neymar down the left channel and the Brazilian's resulting shot cannoned back off the near post to leave Messi with the formalities.

La Masia product and Granada captain Ruben Rochina schemed inventively throughout and drew a sharp save from Bravo.

But having endured a 4-0 Copa loss at Valencia in midweek, La Liga's fourth bottom club would suffer the same fate as Suarez cut the ball across the face of goal for a seemingly obligatory Messi dummy and Neymar's finish.