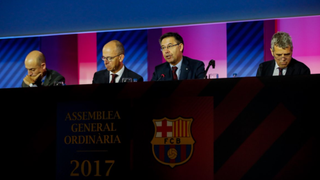 The La Liga giants' earnings of €708m for 2016-17 were presented at the club's General Assembly on Saturday, with club members then approving next year's record budget with 391 votes for and 49 against.

The huge revenues did not include the €222m received from Paris Saint-Germain for Neymar, which should prompt another record-breaking set of figures in a year's time.

It is the first time Barca have surpassed the €700m barrier in terms of revenue for a fiscal year, and the club have now accumulated a profit of €175m since 2010.

Barca plan to have earned €1billion in revenues by 2021, though that strategy could be threatened by the political unrest in Spain following the Catalan independence referendum.

Regardless of how the political situation is resolved, however, Barca have no plans to leave La Liga, with club president Josep Maria Bartomeu insisting a place in Spain's top-flight is key to continuing their financial development.

"Barca is more than a club and it must be a place of concurrence and respect," Bartomeu told the assembly.

"You must respect all, minorities and majorities, think about how you think.

"Barca will not be manipulated by political interests, or where they came from. We want to continue playing in the League and our participation is guaranteed.

"The viability of both institutions goes on."