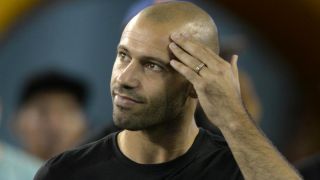 Barcelona technical secretary Robert Fernandez insists the club are keen to sort the future of Javier Mascherano as soon as possible.

Mascherano, 32, had been linked with a move away in the off-season despite two years left to run on his contract at Camp Nou.

However, the two parties are keen to extend their partnership, with Fernandez looking to sort a new deal after securing contracts for Neymar, Sergio Busquets and Rafinha.

"There are issues that still need to be sorted out," Fernandez said as Barca unveiled new signing Denis Suarez on Wednesday.

"We've been doing that with Rafinha, Sergio Busquets and Neymar, and now it's time to do the same with Mascherano.

"He has told us that he wants to stay here, and that's comforting to know."

Mascherano joined Barca in 2010 and has gone on to win 15 trophies with the Catalan giants.