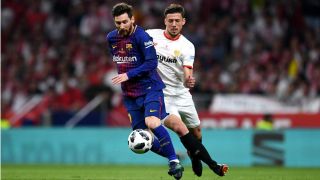 Barcelona will have to pay Clement Lenglet's release clause if they want to sign him, according to Sevilla's director of football Joaquin Caparros.

Defender Lenglet has gained many admirers since joining Sevilla from Nancy in January 2017, quickly securing a first-team role under Jorge Sampaoli and remaining a key figure last season, playing 35 times - more than any of his team-mates - in LaLiga.

Reports of Barca's interest were prominent for much of the campaign and there have even been claims the club already have an agreement with Lenglet.

While his exit has long appeared almost certain, Caparros insists Sevilla will not negotiate with the Catalan giants.

"Let's get one thing clear, something we've always said: Sevilla will not sell Lenglet," he told Marca.

"Barcelona wanted to negotiate a transfer but we will not sell him. It's another thing if they pay the release clause, then any player can leave.

"There will be no negotiating because we don't want to negotiate."

According to reports in Spain, Lenglet has turned down the offer of improved terms at Sevilla, with Caparros adding: "We want Lenglet to stay, that's why we made him a renewal offer.

"[Barcelona] will have to pay the release clause [to sign him] or he stays."