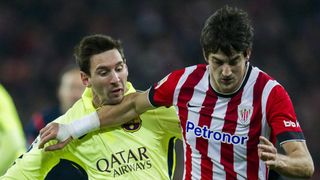 Athletic Bilbao's Mikel San Jose knows his team-mates will need luck on their side if they are to thwart Lionel Messi and Barcelona at the Camp Nou.

Friday's draw for the quarter-finals of the Copa del Rey pitted last season's finalists against one another and Athletic, who prevailed over two legs when the sides met in the Supercopa de Espana at the start of the current campaign, will tangle once more with illustrious but familiar opponents on Sunday in La Liga.

Barcelona are unbeaten in all competitions since an October defeat at Sevilla and Messi collected the fifth Ballon d'Or of his superlative career earlier this week in Zurich.

He returned to Catalonia to help Luis Enrique's men to a 6-1 aggregate triumph over Espanyol, where the hostility from Barcelona's city rivals on both the field and the terraces came in for criticism throughout an ill-tempered Copa tie.

Spain international San Jose, who scored a spectacular goal from the centre-circle when Athletic secured a 4-0 first-leg win over Barca at the San Mames in the season curtain-raiser, is set to have a vital role in stopping Messi and his team-mates from his position in holding midfield.

Having observed Barcelona's reaction to Espanyol's perceived roughhouse tactics, the 26-year-old does not believe they will have grounds for similar complaints at the weekend.

"You can stop Messi with a lot of help and a bit of luck," he told Radio 4G. "You can't just man mark him.

"He has nothing to complain about because we're not a particularly dirty team.

"Obviously we commit fouls, like anyone else, but our intention is to always to win the ball.

"They're the better team on paper, but we know we’re a side that no one likes to face. If opponents want to beat us, they're made to suffer first.

"It gives us confidence knowing that we've played excellently against them before. They won't have enjoyed that."

Luis Suarez and Neymar are set to return alongside Messi in attack for Barcelona, having been suspended and rested among the substitutes respectively at Espanyol.

"It's wonderful to have so many players that can play in different positions," Luis Enrique said.

"We have [Javier] Mascherano, Sergi Roberto, Aleix Vidal and Messi who can play out wide, up front or just behind the forwards.”

Despite a pair of Copa wins over Villarreal, Athletic are yet to win in La Liga in 2016, having followed a 2-2 draw at home to Las Palmas with a 2-0 defeat at Sevilla.

Winger Inaki Williams is favourite to deputise in the central attacking role, with first-choice forwards Aritz Aduriz and Raul Garcia injury absentees, although Borja Viguera and Sabin could also come into contention.

"Aduriz's characteristics have an influence on our playing style and the other players we have in that position are different," said coach Ernesto Valverde.

"Sabin and Williams look for spaces more. Sabin plays well leading the line and he may be handy for us in this match."

Key Opta stats
- Barcelona have won their past 11 league games against Athletic at the Camp Nou.
- Luis Enrique's men have scored in each of their past 17 Liga home matches, averaging 3.29 goals per game.
- Ernesto Valverde has won just two of his 15 La Liga matches against Barcelona, drawing seven and losing six.
- Barcelona have not conceded during the first half their past nine Liga matches, with Eibar breaking the deadlock in October before suffering a 3-1 defeat.
- Lionel Messi has been involved in 15 goals in his past 10 Liga appearances against Athletic (nine goals, six assists).