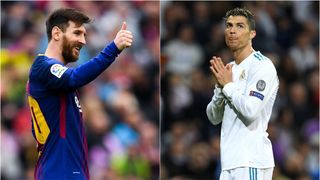 When the fixtures came out for the 2017-18 La Liga season, May 6 was burned on to the minds of Spanish football fans.

Four games from the end of the campaign, Barcelona and Real Madrid would meet at Camp Nou with it all on the line.

Barca will step out on home turf for the first time since taking the title back from Madrid, a cantering triumph that was sealed by a 4-2 victory at Deportivo La Coruna last weekend.

Ernesto Valverde's men are yet to taste defeat in Spain's top flight this season and sit 15 points above their bitter rivals.

One possible explanation for the gulf is a stellar contribution from Lionel Messi, who tops the charts across a raft of Opta metrics during the current campaign. For the Barcelona talisman's long-time foe Cristiano Ronaldo, it is a different story as his imperious game takes on an increasingly narrow scope.

Messi's 32 goals in La Liga this season leave him way out in front at the top of the charts, eight clear of Ronaldo. The 33-year-old's tally of 24 is particularly impressive given only four came before the turn of the year and Ronaldo has made 25 La Liga appearances to Messi's 33.

Goals from outside the box

A quarter of Messi's mighty haul have come from beyond 18 yards, double the next best return of four from Levante's Enis Bardhi. The Macedonian free-kick specialist has netted all of his goals outside the box from dead-ball situations, while Messi has put six beyond the wall and the goalkeeper.

Despite showing his own knack for the spectacular remained in good order with a Champions League overhead kick against Juventus, Ronaldo has not scored from outside the penalty area in La Liga this term.

An area where the big two are comfortably ahead of the rest, with Ronaldo's 166 a huge 55 more than Luis Suarez. However, Messi's 187 goal attempts show him to be even more trigger happy.

Those three are the busiest players around the opposition goal when measured by touches inside the box. Suarez's 266 splits the returns from Ronaldo (245) and Messi (282).

A player can probably get away with Messi's shot total when he is both putting a fair number of them away and also servicing team-mates. The mercurial Argentinian has created 82 chances for Barca colleagues, with Lucas Perez up next on 73 despite Deportivo's relegation.

Toni Kroos (56) is Madrid's representative in the divisional top 10, coming in eighth, while Ronaldo's 38 chances created leave him ranked 35th.

Andres Iniesta's legacy appears to be in safe hands, with Messi's 16 successful through balls putting him six clear of Jonathan Viera – a deficit the latter has no chance of making up having left Las Palmas for Beijing Guoan. Philippe Coutinho has completed six since arriving at Barca in January, the same as Madrid's most prolific supplier in these terms, Isco. Ronaldo has threaded four through balls, placing him 22nd in the division.

Passes in the opposition half

Another area where Messi is untouchable – his 1,484 are over 100 more than Valencia captain Dani Parejo (1,355) and Barcelona team-mate Ivan Rakitic (1,341). By contrast Ronaldo is in no danger of troubling four figures and is barely inside La Liga's top 100 with 572.

The sight of Messi and Ronaldo darting in, out and beyond successions of tackles are defining images of the modern game. However, dribbling is only truly a party piece for the Barcelona man nowadays. Messi has attempted 269 dribbles in La Liga. Levante winger Jose Luis Morales is second – way back on 187 – while Ronaldo's 56 attempts put him 81st.