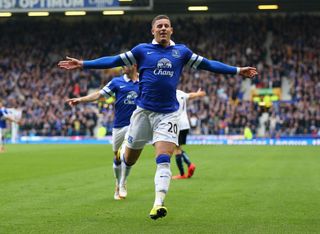 Barkley, 20, was rewarded for his strong Premier League campaign at Everton with selection in Roy Hodgson's 23-man squad for Brazil 2014.

But Martinez warned it would be dangerous to expect too much of Barkley, who joined the likes of Raheem Sterling, Luke Shaw and Alex Oxlade-Chamberlain in a youthful England squad.

"We shouldn't expect Ross Barkley, at the age of 20, to go into a World Cup and be someone who has to win games single-handedly. That would be very wrong," the Spaniard said.

"What is important is, as a nation, we have a responsibility to look after a young man who goes to the World Cup with the only intention of helping England be as good as they can.

"He is still young and we have to protect him. If we protect him well we are talking about a potential world-class talent.

"But it is down to us to allow him time and a little bit of a path to fulfil his potential with England.

"My message to every English fan and supporter in general is that we should embrace the younger generation - and it is phenomenal to have that - who have been called up by the England manager.

"But we have to understand we carry a responsibility of allowing the young players to have a positive experience, whatever that is."