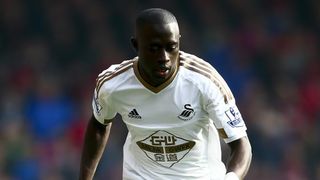 The 23-year-old joined the Welsh side in August 2014 and, having had loan spells with Nottingham Forest and Blackburn Rovers, established himself in the first-team squad last season by making 22 Premier league appearances.

Fresh terms for Barrow mean he is now contracted to the club until June 2019, an additional year to the length of his previous deal.

"Now I have signed a longer contract, I really want to push on here. There is a real sense of excitement for the new season.

Barrow's only league goal of last season – against AFC Bournemouth in March – made him the first Gambian player to score in the English top flight.

Swansea finished the campaign in 12th place under Francesco Guidolin.