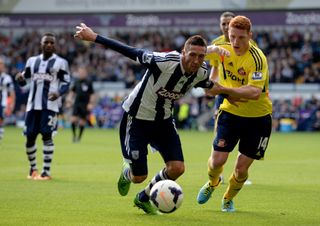 The Frenchman is currently on a season-long loan deal at The Hawthorns and has scored twice in three Premier League appearances.

But QPR midfielder Barton, who played with Amalfitano during his season-long loan at Marseille in 2012-13, was keen for his boss Harry Redknapp to recruit the 28-year-old.

However, the former Newcastle United man claims there is a lack of knowledge in England when it comes to talent in Ligue 1.

"I am still in contact with some of my former team-mates. I speak to Morgan. I really tried to get him here," he told l'Equipe.

"I spoke about him to the manager, to scouts, but here we don't know the French championship.

Amalfitano scored the first goal in West Brom's 2-1 win over Manchester United at Old Trafford on Saturday as Steve Clarke's men moved to 10th in the table.

And Barton was always confident Amalfitano would flourish in the Premier League.

"When he scored this weekend against Manchester United, I took the mickey out of them (QPR)," he added.

"I knew that in England, he would do well."