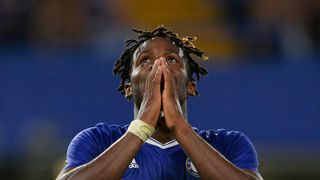 Michy Batshuayi concedes there have been frustrations during his maiden campaign at Chelsea, but the striker is confident the experience will stand him in good stead going forward.

The Belgium international arrived at Stamford Bridge from Marseille ahead of the 2016-17 campaign, but he has mainly been warming the bench with Diego Costa preferred in the lone striker role.

His first Premier League start came in Monday's dramatic 4-3 win over Watford, a match in which he netted just three days on from scoring the winning goal at West Brom that secured the Blues the title.

Batshuayi, though, believes he has made plenty of progress during his first campaign in England and is understanding of his lack of starts.

"There were a lot of frustrations, but this is a big club, with a lot of good players," Batshuayi told The Guardian.

"I need to understand it a bit too. I am a bit younger than some of the other guys. I can only keep on working hard. We have a very good squad, with lots of good players. Lovely and humble lads too. Chelsea feels like a big family. When you can work in those conditions, day in, day out. That is magnificent.

"Of course there were frustrations because I did not play a lot. So enjoying myself with the team-mates was not always that simple.

3 - Michy Batshuayi has scored three goals from just four shots on target in the Premier League this season. Clinical.May 15, 2017

"But I also understood that I had some to work to do. I am happy. My team-mates have always been supporting me. They encouraged me to grab my chance and advised me not to let my head down. They are happy for me now. That is very positive.

"Of course this is a lesson for me. A period that has been very hard for me, but I have also learned a lot. I have made a lot of progress. As a man, mentally, but also physically.

"And tactically too. That is a given with a manager like Antonio Conte. He likes you to work, work, work. Every day."