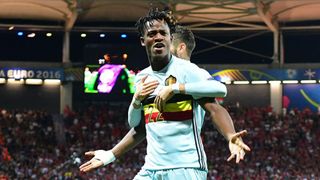 Chelsea have completed the signing of Michy Batshuayi from Marseille on a five-year deal, with the Belgium striker becoming new manager Antonio Conte's first arrival at Stamford Bridge.

Batshuayi - who has reportedly cost the Blues €40million - scored 17 goals and supplied nine assists in his second Ligue 1 campaign, as Marseille finished a disappointing 13th in 2015-16.

The 22-year-old had also allegedly attracted the interest of Juventus, Tottenham, West Ham and Crystal Palace, but Chelsea won the race for his signature.

"I am delighted to sign for one of the biggest clubs in Europe and embark on the next chapter in my career," Batshuayi told the club's official website.

"I hope I can help Chelsea win many trophies during my time at Stamford Bridge.

"Eden Hazard and Thibaut Courtois have told me many good things about the club, and with Conte coming in it's an exciting time to become a Chelsea player.

"This is a fantastic opportunity for myself and my family, I am looking forward to playing in the Premier League next season."

Chelsea were keen to add some more firepower to their squad ahead of the 2016-17 campaign after the departure of Radamel Falcao and Alexandre Pato.

Batshuayi made two appearances at Euro 2016 as Belgium reached the quarter-finals, where Wales ran out 3-1 winners.

He scored Belgium's second goal in the 4-0 round-of-16 win over Hungary.