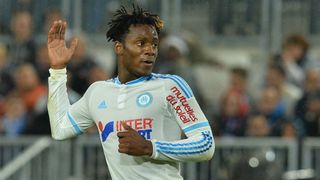 Michy Batshuayi has ended all speculation about his future by signing a new and improved contract with Marseille until June 2020.

The 22-year-old was heavily linked with clubs such as Tottenham and Newcastle United in recent weeks, but he has made the decision to stay with the Ligue 1 outfit instead.

The striker's previous deal ran until the end of the 2018-19 campaign, but he has now signed a one-year extension.

Batshuayi joined Marseille from Standard Liege in August 2014 and has since developed into a key player at the Stade Velodrome.

He currently sits second in the Ligue 1 scoring charts with 11 goals from 19 appearances this season, trailing PSG striker Zlatan Ibrahimovic by four strikes.

Furthermore, promising defender Benjamin Mendy has also reached an agreement with OM over a new contract that will keep him at the club until 2019.

The 21-year-old, who joined Marseille from Le Havre in 2013, had a contract until June 2017, but has signed a two-year extension.