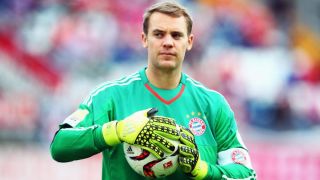 Manuel Neuer is ready to face an "aggressive" Bayer Leverkusen side as Bayern Munich look to end a disappointing run of results at the BayArena on Saturday.

A 2-1 Bundesliga victory in March 2013 was the champions' only win in their last eight away games against Leverkusen in all competitions.

Bayern's preparations for the clash have been overshadowed by off-the-field news, with confirmation that Pep Guardiola will join Manchester City next season and media allegations concerning the behaviour of Arturo Vidal - which prompted the Chile international to threaten legal action - stealing the headlines, along with claims of a dressing-room 'mole' unsettling the squad.

Neuer, however, is looking forward to playing under the floodlights in Leverkusen and is confident his side are prepared for the kind of test they will face.

"I'm a big fan of floodlit games," he told the media. "It's not an easy game, especially in Leverkusen. They will try to put us under pressure quickly.

Bayern are facing something of a defensive crisis for this weekend. New signing Serdar Tasci is set to miss out after suffering a head injury in training, while Jerome Boateng (groin) and Javi Martinez (knee) are both out and Medhi Benatia is battling for full fitness.

Leverkusen also boast a formidable attacking threat, having scored in every home league match since a shock 1-0 defeat to Darmstadt in September, while striker Javier Hernandez won the Bundesliga player of the month prize for the third time in a row after taking his tally to 13 in 16 matches with a double against Hannover.

"We want to carry on where we left off," midfielder Kevin Kampl told the club's official website. "We created chances and scored some good goals.

"The positive impression we made, plus with the positive mood, I definitely think we can get something out of the game.

"We need everyone to be on their best form. I think that will stand us in good stead."

Bayern claimed a 3-0 victory in the reverse fixture at the Allianz Arena in August thanks to two goals from Thomas Muller and one from Arjen Robben.

A win for Leverkusen could lift them up to third depending on Hertha Berlin's result against second-placed Borussia Dortmund, while Bayern will stretch their lead at the top to 11 points should they win and Dortmund lose.

- Bayern have lost just once when opening the scoring in this fixture (W42 D5), 4-2 in November 1997, having been 2-0 up.
- Bayern (17 wins) and Leverkusen (9) are the only two teams to have won every Bundesliga game they've scored first in this season.
- With 52 points from 19 matches, Bayern have the second-best Bundesliga record in history. They had just one point more in Pep Guardiola's maiden season (2013-14).
- Leverkusen (17) and Bayern (14) have hit the woodwork more than any other side this season. Robert Lewandowski and Hakan Calhanoglu are joined by Lars Stindl at the top of the individual table (four each).
- Stefan Kiessling has scored 139 times since making his Bundesliga debut in April 2003 – a league high. He overtook Mario Gomez's tally of 138 last weekend.