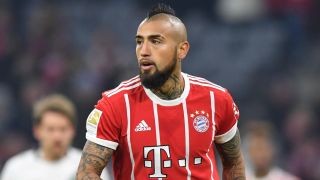 Arturo Vidal insists he is focused on winning silverware with Bayern Munich this season and is ignoring reported interest from Chelsea.

The Premier League champions have been linked with a €37million bid for the midfielder, who worked with Blues boss Antonio Conte at Juventus.

However, although he is aware of the rumours, Vidal says he is concentrating solely on Bayern's treble charge this season.

"Yes, I've heard about it, but I'm fully focused on the season with Bayern and I'm only looking day-to-day," the Chilean said after Bayern's 5-3 friendly win over Sonnenhof Grossaspach on Tuesday, as quoted by Sport.

"We're a great team and we have big goals. We want to win every trophy. That's what my focus is."

Head coach Jupp Heynckes insisted last month Vidal would not be sold during the transfer window.

The 30-year-old has made 14 Bundesliga appearances this season, scoring five goals.

Bayern resume their title defence against Bayer Leverkusen on Friday.