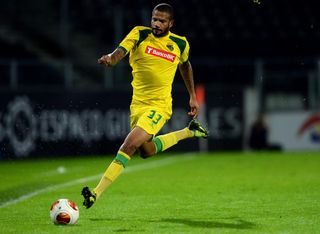 The 23-year-old moved to Manchester United in an eyebrow-raising £7.5 million move from Vitoria de Guimaraes in 2010.

Then manager Alex Ferguson admitted he had never seen the forward play, and went on to deploy Bebe just seven times in his debut campaign.

Bebe endured unsuccessful loan stints with Besiktas and Rio Ave, but turned in a number of fine performances for Pacos Ferreira last term, scoring 14 goals in all competitions as Pacos just maintained their Primeira Liga status.

After a string of eye-catching performances and spectacular goals, some calls were fielded for Bebe to be included in Portugal's FIFA World Cup squad, though he was overlooked by Paulo Bento.

However, with reports in the British media claiming he could be used as a makeweight in a deal for Benfica's Nico Gaitain, Bebe is hopeful a deal can be secured.

He told Antena 1: "I think it would be a good opportunity for me.

"For now I will wait for my agent to resolve it. He will certainly know better than I do whether it's true or not.