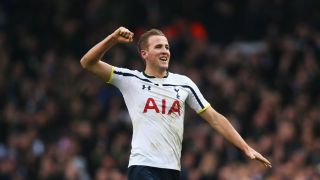 Kane has exploded to life in recent months and the Premier League's man of the moment enjoyed another outing to remember on Sunday as his double secured north London bragging rights for Tottenham over Arsenal.

That brace took the 21-year-old's tally to 22 goals in all competitions for the season, more than any Premier League player, leading to fans and pundits urging England manager Roy Hodgson to include Kane in his squad for next month's fixtures with Lithuania and Italy.

Former Manchester United and Real Madrid star Beckham - who earned 59 of his 115 England caps as skipper - is among those who believe Kane has earned the chance to shine on the international stage.

"I think everyone is singing his praises, and rightly so. He's 21-years-old, he's working hard and has got a good head on his shoulders, so we will see.

"It doesn't matter what age you are - if you're good enough then you should play."

England face Lithuania in a Euro 2016 qualifier at Wembley on March 27, before travelling to Italy for a friendly four days later.