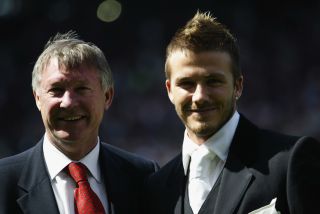 The former England captain confirmed on Wednesday that he is to set up a franchise in Miami, triggering a clause in the contract he signed with MLS after moving to LA Galaxy in 2006.

Beckham was criticised by former United manager Ferguson in his recent autobiography, with the 71-year-old accusing him of "being obsessed with celebrity status".

But Beckham refused to hit back at his former boss, having won six Premier League titles, two FA Cups and the UEFA Champions League in a 10-year stint under the Scot at Old Trafford.

He said: "The funny thing was I'm involved in the MLS and bringing my own franchise into the league and actually he was one of the first in my phone book to contact as the manager, but I'm not so sure anymore - I'm not sure he'd accept!

"All joking aside, at the end of the day I won't be negative about Alex Ferguson because he gave me the chance to live my dream.

"I'm not going to sit here and be negative about a man who gave me a chance to play for my boyhood team, who I always dreamt of playing for.

"He gave me the chance to do that, he believed in me and believed in the rest of the young lads who came through this with us."

Beckham enjoyed a hugely successful six-year spell at the Galaxy, winning the MLS Cup twice and paving the way for other stars such as FIFA World Cup winners Thierry Henry and Alessandro Nesta to join MLS sides.