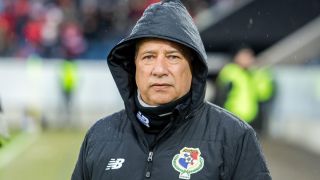 Panama will not be using Iceland's shock draw against Argentina as motivation after boss Hernan Dario Gomez insisted Belgium are superior to Lionel Messi's men ahead of their World Cup debut.

Newcomers Panama have an entire nation behind them as they prepare to make history against a star-studded Belgium side boasting Eden Hazard, Kevin De Bruyne and Romelu Lukaku in Sochi on Monday.

Asked if Panama could replicate Iceland's result in the Group G clash at Fisht Stadium, head coach Gomez told reporters on Sunday: "I'm not ruling it out. Anything can happen. Iceland had a good run at the Euros.

"I must say Argentina aren't up there with the same quality as Belgium. Argentina and Iceland don't have a great distance but there's a greater distance between us and Belgium. We are not the favourites but who knows."

Waiting for manager Hernan Dario Gomez to front the media ahead of tomorrow’s opener against in Sochi.Set for his third World Cup appearance with his third nation (Colombia and Ecuador).June 17, 2018

Gomez, who is set to make his third World Cup appearance with a third country, highlighted Belgium's quality and their potential to challenge for silverware in Russia.

"We are not favourites but if we have a good day, we could do something good," he said. "Anything can happen. We're facing an extraordinary team with a wonderful coach [Roberto Martinez]. He has the best players.

"Cristiano Ronaldo and Lionel Messi are out of the world, but Belgium are true candidates here in Russia. Anything can happen in football. We would feel proud to get a good result. There is a full possibility of results. There are lots of variations and every match is different."

While Panama face an uphill battle, Gomez and veteran goalkeeper Jaime Penedo are determined to make their country proud at the showpiece event, having denied the United States a spot at the World Cup following a gruelling and dramatic qualifying campaign.

"We can be an example and leave a legacy in Panama for future World Cups," Gomez added. "It's pivotal. To be here at a World Cup. It's one of the most wonderful things in your career.

"We have to remember that some teams may be feeling cool and calm, but not because they're facing us. Everyone gives their best. I don't think teams will be overconfident facing us."

Gomez continued: "The country is holding its breath for us. They're full of enthusiasm and so are we. We have to have a hot body but cool mind."