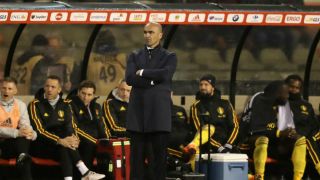 Belgium cannot afford to rely on the individual talents of Kevin De Bruyne, Eden Hazard and Dries Mertens if they are to be successful at the World Cup, says Roberto Martinez.

The Red Devils travel to Russia with some of the hottest talent in Europe within their ranks, and consequently are tipped to challenge for the title.

Premier League winner De Bruyne completed 18 assists for Manchester City in 2017-18, while Chelsea's Hazard found the back of the net on 12 occasions.

In Italy, Mertens was fifth top scorer with 18 Serie A strikes, while Martinez also has the likes of Romelu Lukaku, Jan Vertonghen and Thibaut Courtois at his disposal.

Despite the individual talent throughout Belgium's squad, Martinez – who oversaw Wednesday's 3-0 win over Egypt in Brussels – is keen for them to come together as a group if they are to improve on a quarter-final finish four years ago.

"What is good about this generation is that when they come together they are a group of players that are prepared to work for each other and be a team," the Spaniard told Omnisport prior to the midweek friendly victory.

"I don't think we should look any further than what we can achieve as a team and the team is made by outstanding individuals.

"But that's probably what we need to work extremely hard in the preparation that we can add all of these individuals to become a strong team without expecting one single player to win a football game because that will never take us to where we want to get."

Martinez will be supported by Thierry Henry at the World Cup, and he believes the former France international has helped develop a winning mentality within the squad.

"Thierry has been a fantastic addition to our technical staff," added the former Everton boss.

"To have his experiences he had as a player are invaluable and for someone who has won the World Cup and the European Championships in the middle of a very talented generation but who were the first ones to have the winning feeling around the group which is essential.