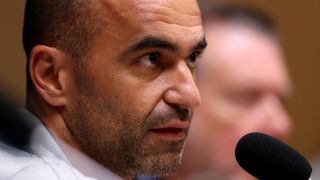 Belgium coach Roberto Martinez says all of his players are desperate to be on the pitch ahead of the World Cup round-of-16 clash with Japan in Rostov-on-Don.

Having sealed passage from Group G with a match remaining, Martinez made sweeping changes to his starting XI for the 1-0 win over a similarly fringe England team in Kaliningrad.

Finishing top with a 100 per cent record earned Belgium a meeting with the Samurai Blue at Rostov Arena, where a host of first-choice stars, including Eden Hazard and Romelu Lukaku, are likely to return for kick-off.

"The group is in a very good moment mentally and physically, the players are desperate to be on the pitch," Martinez told a news conference.

"The ones who played against England had a really good experience. And the ones who were rested are waiting to get back on the pitch.

"The players are ready to get the rhythm as fast as they can."

Belgium defeated Japan 1-0 in a friendly in November, but Akira Nishino has since replaced the sacked Vahid Halilhodzic at the helm of the team.

"The biggest difference is the change of coach," Martinez said of his team's opponents.

"In essence they are exactly the same, great energy, organised.

"This Japan team shows there is a generation with a very good age. A lot of experience, they've played in Europe's big leagues for a long time.

"We'll have to be concentrating at all time because of their dynamic approach and the amount of players they can accumulate in both boxes."

Martinez confirmed Belgium have been practising penalties, but should the game go down to a shootout, the Spaniard knows no amount of training can replicate the pressure his players will be under.

"I think you have to be prepared for everything," he said.

"It's important not to underestimate the occasion.

"The players have been practicing but nothing will prepare you for taking the penalty that will get you through to the next phase in the knockout stages of the World Cup."