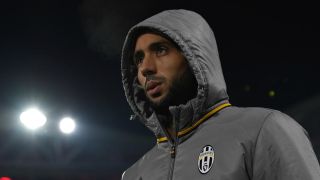 Medhi Benatia does not blame Massimiliano Allegri for his limited opportunities at Juventus this campaign.

The centre-back featured for the full 90 minutes in the 4-1 win over Palermo on Friday, but had not played in Serie A since November prior to that.

He admits his lack of first-team action has been frustrating, but insists sulking is not an option.

"Friday I had the chance to play and help the team win, which was very pleasing. I am feeling in good shape because I also featured four times for Morocco within the space of just over a fortnight at the Africa Cup of Nations," Benatia told the club's official website.

"Before that, my last league game was the defeat at Genoa. After matches like those, any player would be champing at the bit to get back out on the field and put right the wrongs after three or seven days.

"I have had to wait three months, which was a pity, but I respect the manager's decisions which have been correct as the team keeps winning.

"Whoever plays always does well, which is a great quality of this side. Individual situations are less important. All I can do is get my head down, work hard and take full advantage of the opportunities that come my way."

The 29-year-old has made 11 appearances in all competitions for Juventus since joining the club on loan from Bayern Munich.